The Spa Oceana™  health capsule is the most advanced Dermalife™ spa product. It combines a spacious hydrotherapy bath with all the various functions of a health capsule, creating a wonderful experience and a feeling of sublime satisfaction both during and after the treatment. 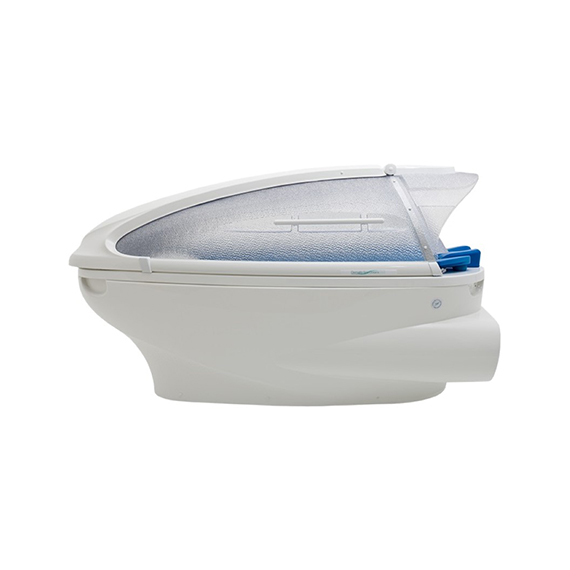 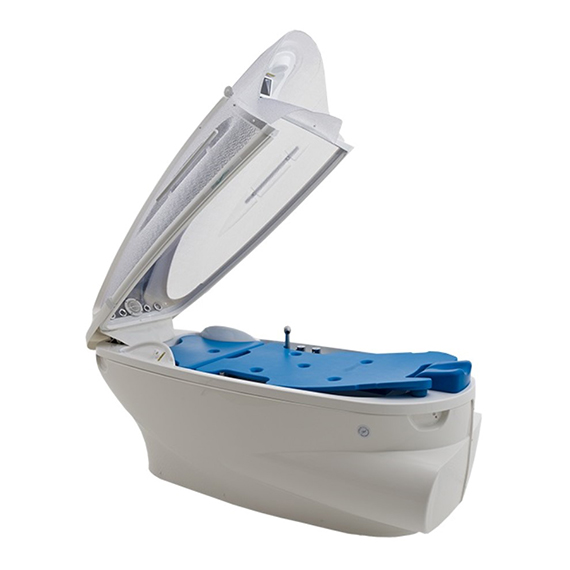 Hydrofusion™ works by using two thermotherapy principles with opposite effects to create a cosmetic and healing effect. These principles are deep tissue heating using infrared radiation, and steam film which helps the skin maintain its moisture, facilitates the dissolution and absorption of the active ingredients found in solid masks (the steam generator only uses clean distilled water).

During the treatment, micro-ionized seaweed, sea mud, gels, herbal and aroma therapy and masks are used. Infrared radiation heats the body to a depth of up to 4 cm without heating the surrounding air.

Steam helps the body to release toxins and residues, improving the texture, elasticity and structure of the skin, and enhancing the effect of different cosmetic products used during the treatment. Steam relieves tension, helps to relax and recover, regain strength and improve the overall mental and physical state.

Dermalife™ spa-capsules use colour therapy of the latest technology with lamps surrounding the whole body.

Chromotherapy can affect the body not only through vision but also with electromagnetic waves of different wavelengths that penetrate the body and carry a certain type of energy. Each colour emits different energy and therefore the colours affect the human body in different ways. For example - red, yellow and orange tones increase blood pressure, pulse and breathing, while green, purple and blue tones have the opposite effect.

Lights reflecting off the smoked glass surface take you to a state of harmony and balance. All integrated treatment programs of the capsule include a special chromotherapy mode. The blending and separation of all colours of the visible spectrum create a unique visual effect that is either relaxing or invigorating and toning.

Cooling breeze for the face

In Dermalife™ capsules, you can use face cooling fans of different intensity, making your time in the capsule even more comfortable.

Vibromassage
The Dermalife™ capsule has an integrated and patented vibration system, allowing for a continuous pulsing vibromassage, aimed at:

Infrared is invisible to the human eye and can be sensed as warmth. Infrared penetrates into deep muscle tissue and internal organs, affecting the body from the inside out and creating 2-3 times more sweating at lower temperatures than hot air. The deep heating of muscle tissue, subcutaneous fat and internal organs is one of the main factors that make a SPA treatment more effective.

The general effects of infrared:

The VICHY SHOWER * integrated into the capsule has ten spray nozzles that rotate 360°, and a thermoregulatory system. The shower can be used for thalassotherapy treatments (in thalassotherapy or sea therapy seawater is used as a form of therapy).

With the three mode adjusting programs of the VICHY shower, it is also possible to perform contrast therapy (Scottish shower) in which hot and cold jets of water alternate and therefore create an even better result.

The integrated VICHY shower can be used as part of a SPA treatment or as an individual procedure.

With the manual underwater massage, * desired areas can be targeted more intensively.

The Dermalife™ capsule has a unique integrated system for applying active ingredients onto the skin. The liquid is poured into a special container. The liquid is then sprayed into the capsule as a fine mist. The liquids may contain both water-soluble and insoluble particles such as vitamins, minerals etc. The system can be used for applying self-tanning lotion, moisturiser, herbal extracts or special medical preparations onto the skin.

* Available in the Dermalife™ Spa Oceana™ and Spa Jet™ range.

The Dermalife™ capsules are equipped with a control panel that can be used to adjust the settings of the device by either the operator or the customers themselves. All orders are displayed on the retractable LCD screen.

The 5.6"  LCD screen can also be used to watch films or other desired content while enjoying health treatments.

In order to offer our customers complete relaxation, all Dermalife™ capsules come with an audio port.

Enjoyable music stimulates feelings and emotions while relieving stress and tension. Along with other functions of the health capsule, pleasant background music makes the spa experience even better.